Cape Town has two glittering coastlines with a beach to suit every mood and moment. Whether you’re after beachside bars, secluded coves, big waves, safe swimming beaches, or a romantic spot for a sunset picnic, there’s something here for you.

Clifton
Clifton has four beaches (Clifton 1st, 2nd, 3rd and 4th) with each one home to its own set of typical visitors. The beauty of Clifton is not just the bathers (but yes, the eye candy is something to behold) but its positioning. Clifton hardly receives any wind and provides a sheltered bay for the yachts and small boats. A great place to see and be seen. Camps Bay
Camps Bay is near Clifton but much bigger and more of a family beach. To the right lies Glen Beach, which has the best surf in the area, and behind Camps Bay beach is a Miami-like strip of bars and restaurants ensuring that a cold drink or hot meal is never too far away.

Muizenberg
Muizenberg is well-known for its multi-coloured beach huts and is located in the scenic False Bay, on the opposite side of the Cape Peninsula to the above-mentioned beaches. It is a recognised Blue Flag beach and a favourite spot for families and aspiring surfers. 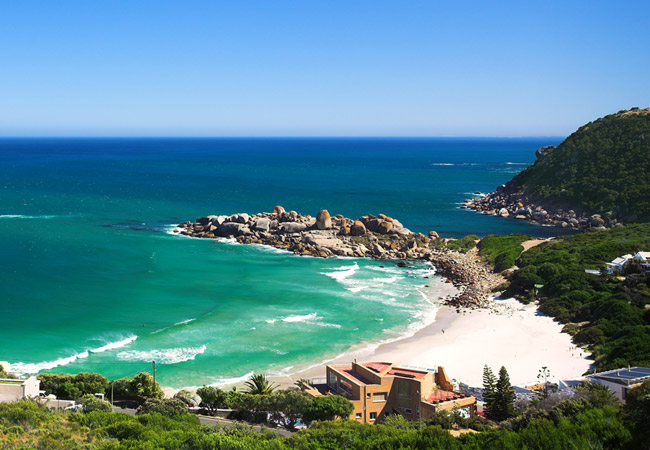 Llandudno
Llandudno has it all, a beach big enough to play sports on, great waves for surfers and even a nudist beach, Sandy Bay, within walking distance. This is a bit further from town than Camps Bay and Clifton but is a popular beach with locals. 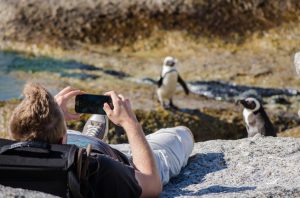 Everything you need to know about Cape Town, downloadable for free from the App stores for IOS and Android devices. 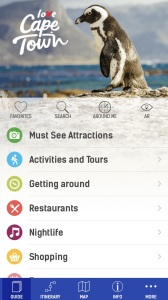 Targeted predominantly at first time visitors to Cape Town, the app is like a “local in your pocket” with an insider guide sharing hints and tips from locals alongside a carefully arranged and easy-to-use list of practical tools.

Featuring hundreds of Cape Town sightseeing landmarks, practical visitor information and user-friendly maps – the new Official Guide to Cape Town will also allow you to create and store an itinerary as you go, or simply suggest some themed itineraries for you.

If you’re coming to Cape Town and you’d like to know how you can keep busy, here are some suggestions.

Cape Town is a beautiful place to explore, but to do it from the air can be sensational. The easiest way to do this is to go to the V&A Waterfront where the steel birds take off daily. There is a range of different routes you can choose from, such as the Atlantico, Two Oceans, Robben Island and Full Peninsula. As there are different operators to choose from and we will gladly make a reservation with our favourite one!
Cost: R1,050 per person – R4,000 per person
Operating hours:  08h00 – 17h30 -7 days a week 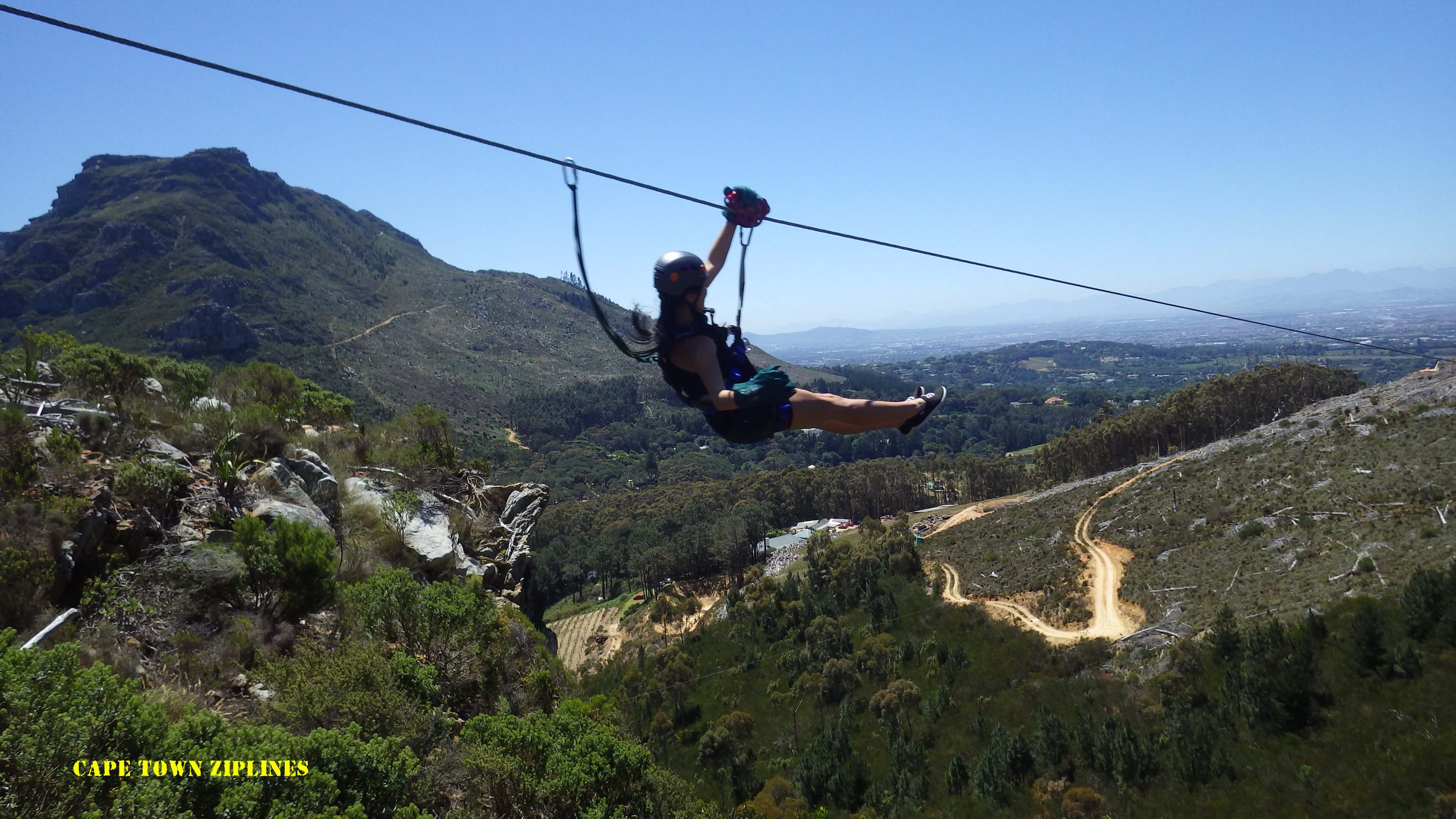 Cape Town Ziplines is close to the CBD and easily reached on the Hop-on Hop-off City Sightseeing Bus. This is one of Africa’s longest and highest Zipline tours. The zipline is approximately 2.3km in total length, with single cables that stretch up to 500m and that soar 155m above the ground at their highest point. Ask us to book this exciting experience for you.
Cost: The two-hour tour costs R480 per person
Operating hours: Monday – Sunday: 09h00 (first tour departs) – 16h00 (last tour departs).
Tandem Paragliding. 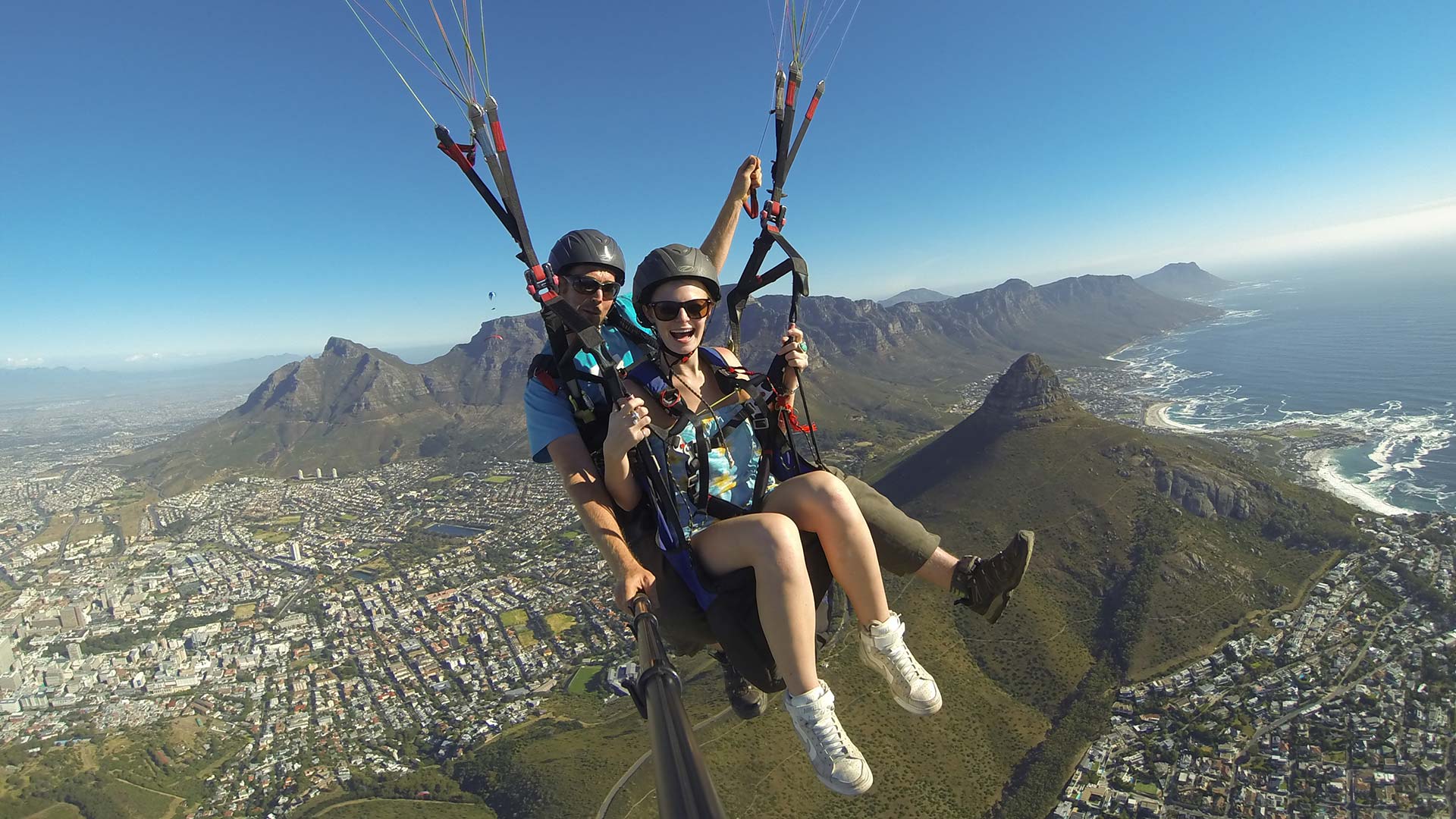 Tandem paragliding flights are mostly done from Signal Hill but they also occasionally take off from Lions Head inside the beautiful Table Mountain National Park. The paragliders either land in Camps Bay or Green Point after the thrilling ride down from the mountain. Just beware, it’s over much faster than you might imagine (7-20 minutes), and you’re definitely going to want to do it again. We will happily book a flight for you!
Cost: R1150 per person per flight
Operating Hours: 07h00 – 19h00, weather permitting.

Muizenberg is considered South Africa’s ‘best learn-to-surf beach’ due to its gentle and consistent breaks. Voted by National Geographic as ‘One of the World’s Best Surf Towns’, Muizenberg offers a great introduction to the wonderful thrill of surfing.
Cost: Gary’s Surf School charges R380 for one person for a two-hour lesson. The Surf Emporium charges R330 for one person for a one and a half hour lesson. For both, the price drops for larger groups.
Operating hours: Times change according to the tides. Contact the surf schools to arrange a time before you go. Kaskazi Kayaks launches its tours from a small beach in Three Anchor Bay and embarks on a 3 – 5 km journey either towards Granger Bay or Clifton Beach. A range of seabirds can be seen on the trips but it is the penguins, seals, dolphins and whales that cause the most excitement. Trips are approximately two hours long. If you have previous paddling experience they can arrange half day kayak trips too.
Cost: R350 per person
Operating hours: The first tour departs at 07h30, next one at 10h00. 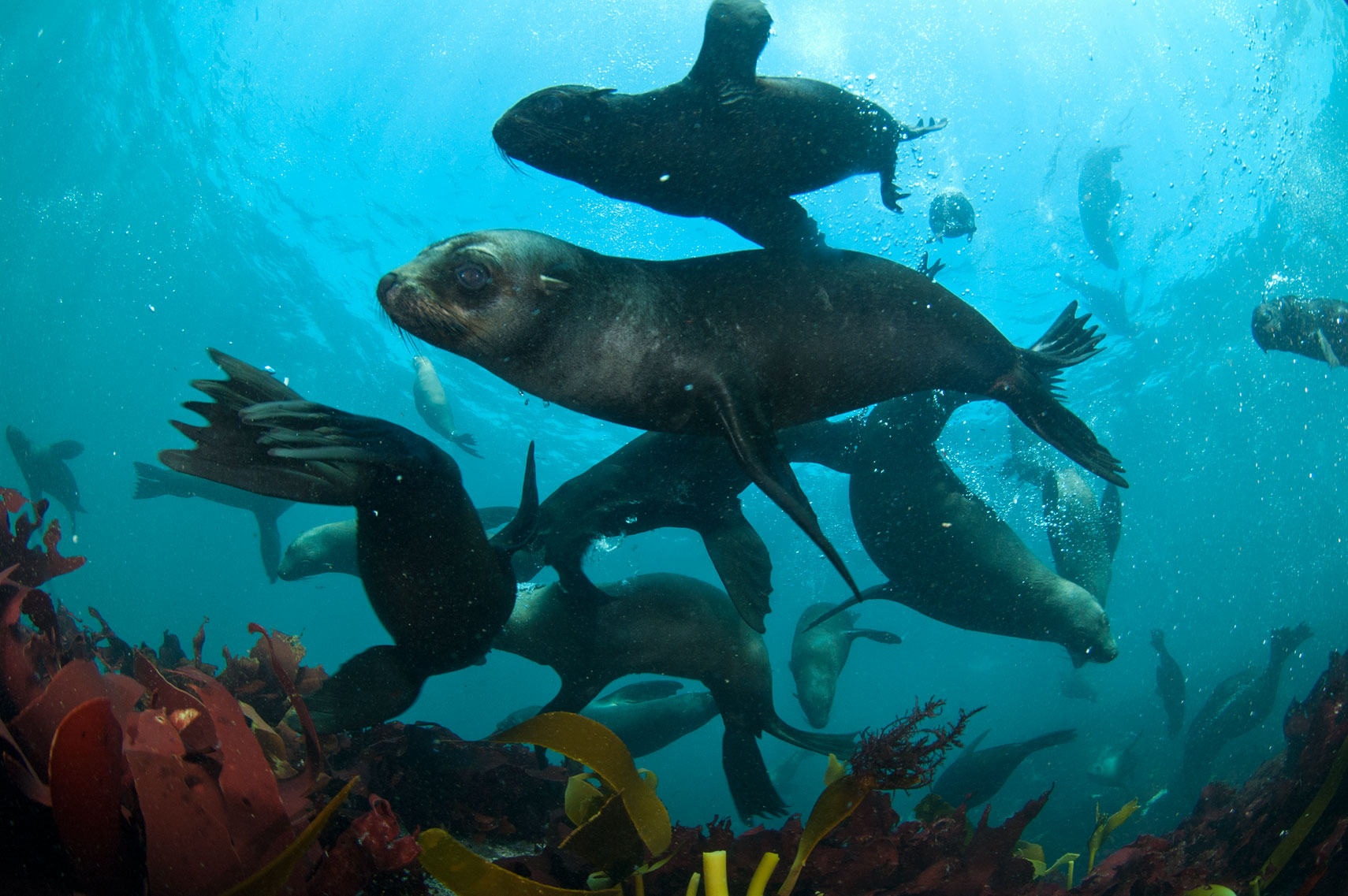 Animal Ocean has marine guides who are dedicated to getting you in the water with the playful Cape fur seals. Cape Fur seals occur naturally on islands around the southern African coast and are found nowhere else in the world. Duiker Island in Hout Bay is home to 10 000 seals, which, as they say, ‘brings you mask-to-whisker with playful and inquisitive wild animals in their natural habitat.’
Cost: R650 per person
Operating hours: Typically leaves in the morning and takes 3 hours.

If you stayed with us before, please do share your captured memories with us via email – stay@anafricanvilla.co.za as we would love to post it on our page 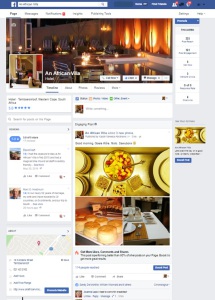 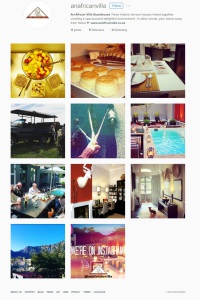 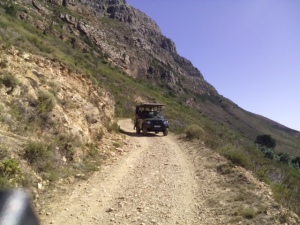 A wine tasting safari with magnificent views from the lower slopes of this iconic Mountain? Yes, you read right! Henri Bruce, of the Durbanville Hills Wine Estate is available for taking our guests on a three hour rugged drive on this Safari vehicle around the front face of Table Mountain.

The Vehicle Can Accommodate Six Guests/ Minimum Two Summer schedule 1st October 2017 till 1st May 2018 Starting time 11.00 till 3.00 Cost R500.00 per adult Children under 10 no charge The trip includes snacks and several glasses of some of this award-winning winery’s best vintages and a free bottle of bubbly! There are also snacks on offer to compliment the wines. It’s a most unusual experience and fits well with a visit in conjunction with your obligatory Table Mountain top visit (whether hiking or by cable car.) 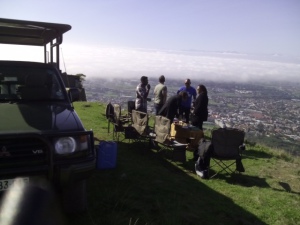 The safari starts at the parking lot just off the Kloof Nek access road to the Cable Station (Tafelberg Rd). It is recommended that you book your Cableway Tickets online before the time as these are not included in the wine excursion fee. Henri will drop you off at the lower cable station (or at Platteklip Gorge if hiking) on the way back from your

Be prepared for superb views, possibly some chilly winds and sightings of resident raptors. Dress warmly,  though cosy blankets are provided. Minimum of 2 passengers, maximum 6. Ask the reception staff at An African Villa to reserve your places!

If staying at An African Villa, use the computer in our library to book a ticket online and print it out at reception.

FASHION, JEWELLERY, ART AND SO MUCH MORE!

This beautiful space is home to more than 150 tenants who represent over 365 brands. A vast selection of products can be found here from ceramics and furniture to textiles, fashion and jewellery. This vibrant addition to the V&A Waterfront also includes the Jubilee Exhibition Hall and smaller spaces which play host to world famous exhibitions, live entertainment and workshops. From December, the celebrated Art of Brick will be housed here. Not only a place to shop,  the Watershed also offers a range of treatments available for your mind, body and soul which can all be found at ‘Wellness at the Watershed’ on the mezzanine level.

(for more updates on WHAT’S NEW , see categories on the right side of your screen)

(for more information on WHAT’S NEW see Categories on right of screen). 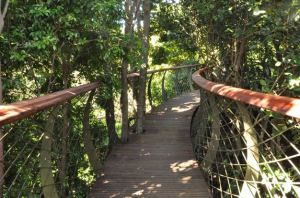 The Centenary Tree Canopy Walkway is a new curved steel and timber bridge that winds and dips its way through and over the trees of the Arboretum. Inspired by a snake skeleton, and informally called ‘The Boomslang‘ (meaning tree snake), it is a low-maintenance, low-impact sculptural raised walkway.

(for more updates on What’s New, see Categories on the right of your screen)

This wacky bakery sprang to fame when it was featured in a television series highlighting the extremely flamboyant, “over the top” confections created by this team. Sadly Charlie herself passed away recently but her daughters carry on the tradition. Well worth a visit!

With a string of excellent reviews, the new Cassis Salon de Thé in Gardens has proved to be a fashionable destination with its variety of breakfasts, light meals and sweet or savoury delights. Sophisticated but fun, the Garden’s salon is a contemporary blend of innovative finishes and our founding elements such as our always prominent purple branding.

The relaxed European décor style coffee shops hum with atmosphere and ambiance where clients can savour goodies from the variety of light meals – not to mention our superior quality cakes and pastries. 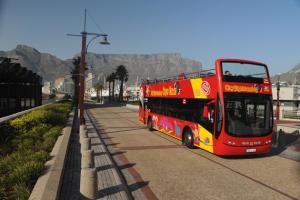 There are several stops for the tourist buses within walking distance of An African Villa.

The bus company has introduced a new routing system. The so-called RED BUS (Stop 6 from the Villa) now only goes around the Camps Bay coast, Waterfront and up to the Table Mountain Cableway.

However, you can tag on an additional loop called THE YELLOW BUS free of charge which takes in the historic City Centre.

We recommend that you walk to stop 15 (Mount Nelson) from the hotel and take the YELLOW ROUTE first before swapping to the RED ROUTE. This makes an excellent introduction to the city.

If you have time (and especially on a SUNDAY when the city more or less shuts down) we recommend that you take the BLUE ROUTE which takes in Kirstenbosch, one or two Constantia wine farms (another FREE add-on) and the lovely Hout Bay valley. This is called the “MINI PENINSULA TOUR” but do not be fooled into thinking that it can replace the actual Cape Peninsula Tour – Penguins, Cape of Good Hope, and fantastic coastal scenery.

(For updates on WHATS NEW in the city, see Categories on the right side of your screen)